I've been contemplating gray. Gray, after all, is an elegant color, and I LOVE gray. This brings me to where I'm at in January 2022. I'm happy, I'm looking forward to creating new worlds, and new civilizations, to boldly go where no Camille has gone before. I am knowledge, ignorance, fear,  bravery, sorrow, power, and I am excited! I am gray! 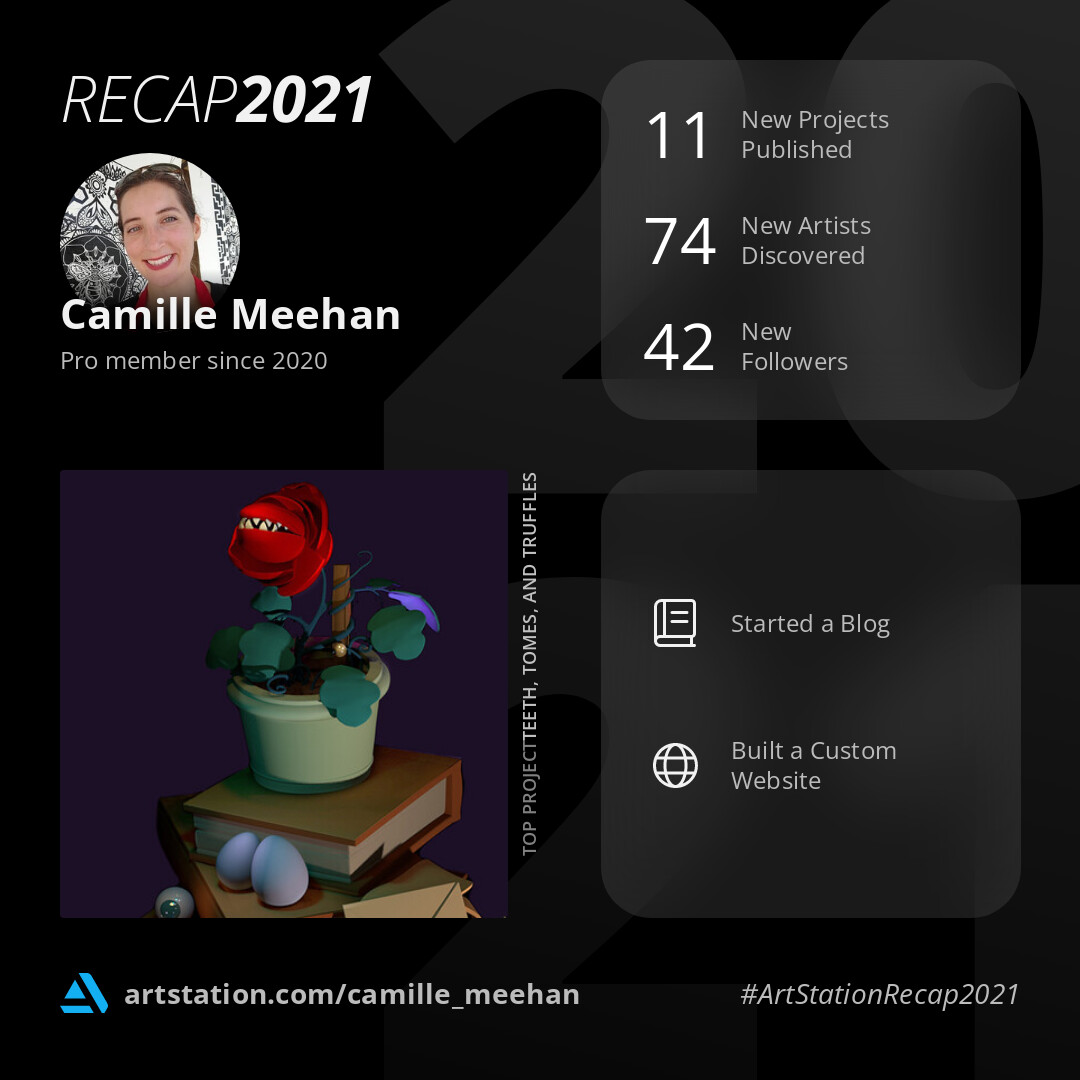 Setting up vertex colors on the modified train car. I'm going to do the same workflow on the safety lap bar (not shown here.) When it comes to Substance I'll have one texture set for each, and color IDs based on the vertex colors for each texture set. Happy New Year! 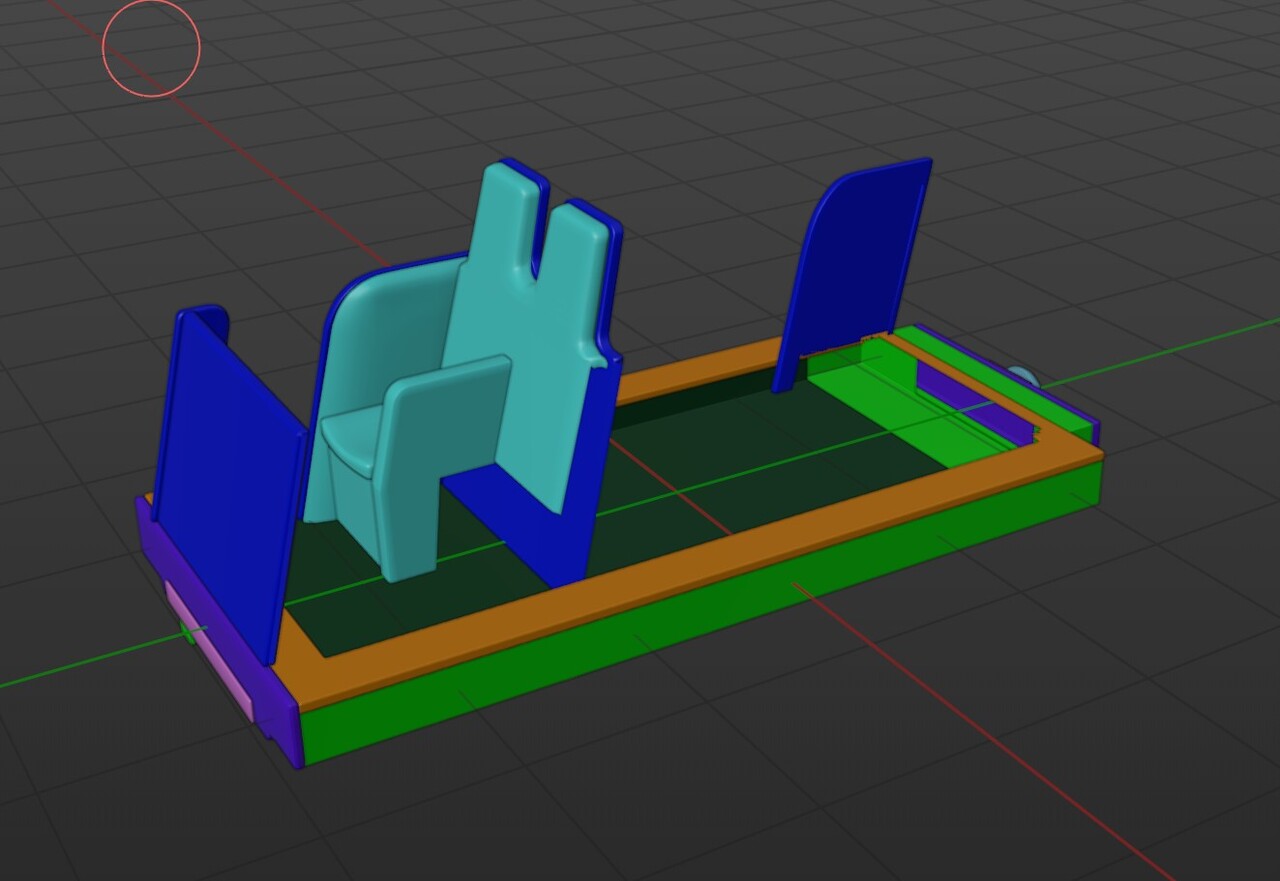 I was playing with an artmaker called Dream. Came up with this exhibit. Cauldrons, jars, pots and books, the table comes along

Since my last post I've blocked in the entire table with basic cylinders and rectangles, and then moved on the adding more details as shown in the image below. I also made substantial progress on UVs and texturing of the net, which is working very well. I'll show that in another update. 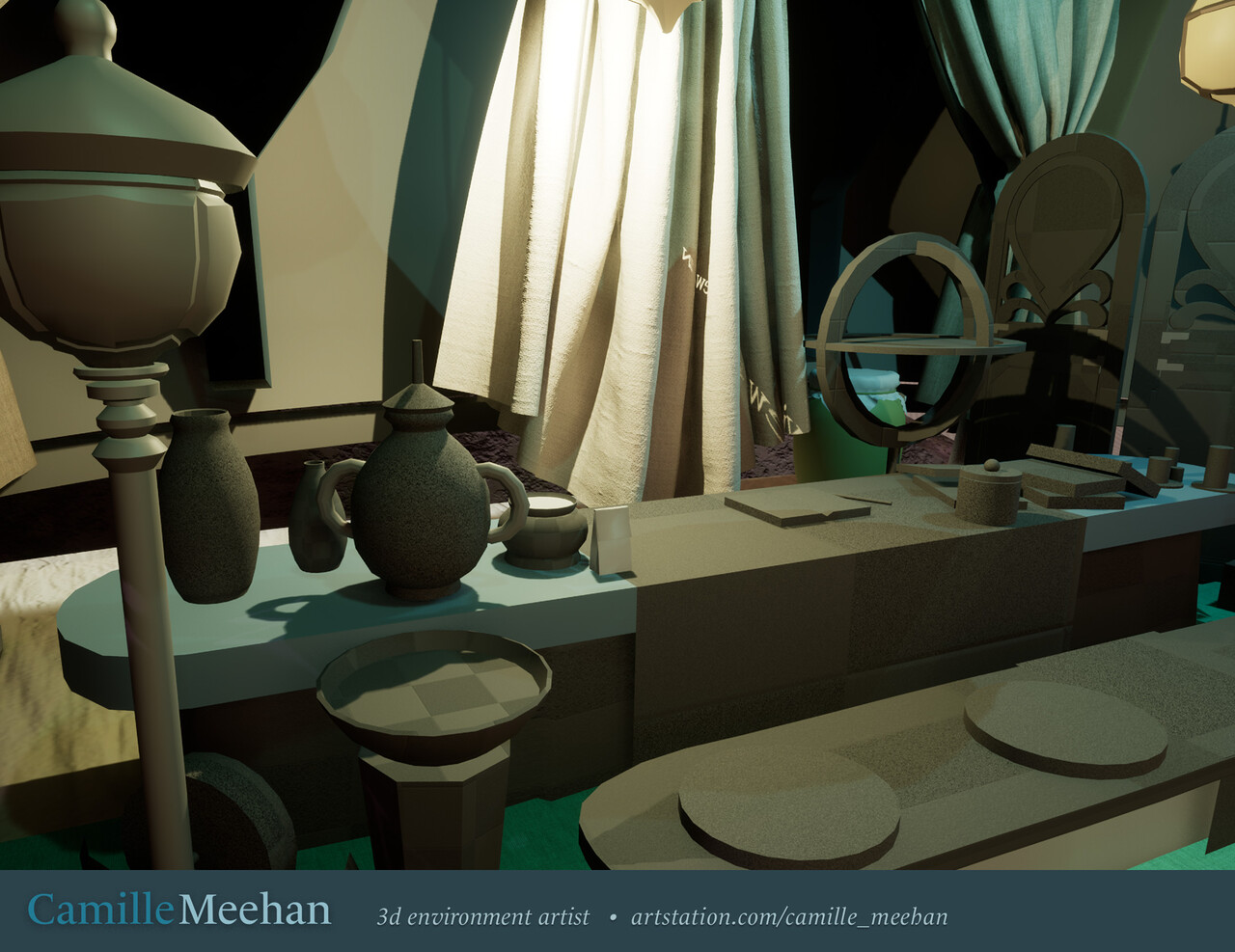 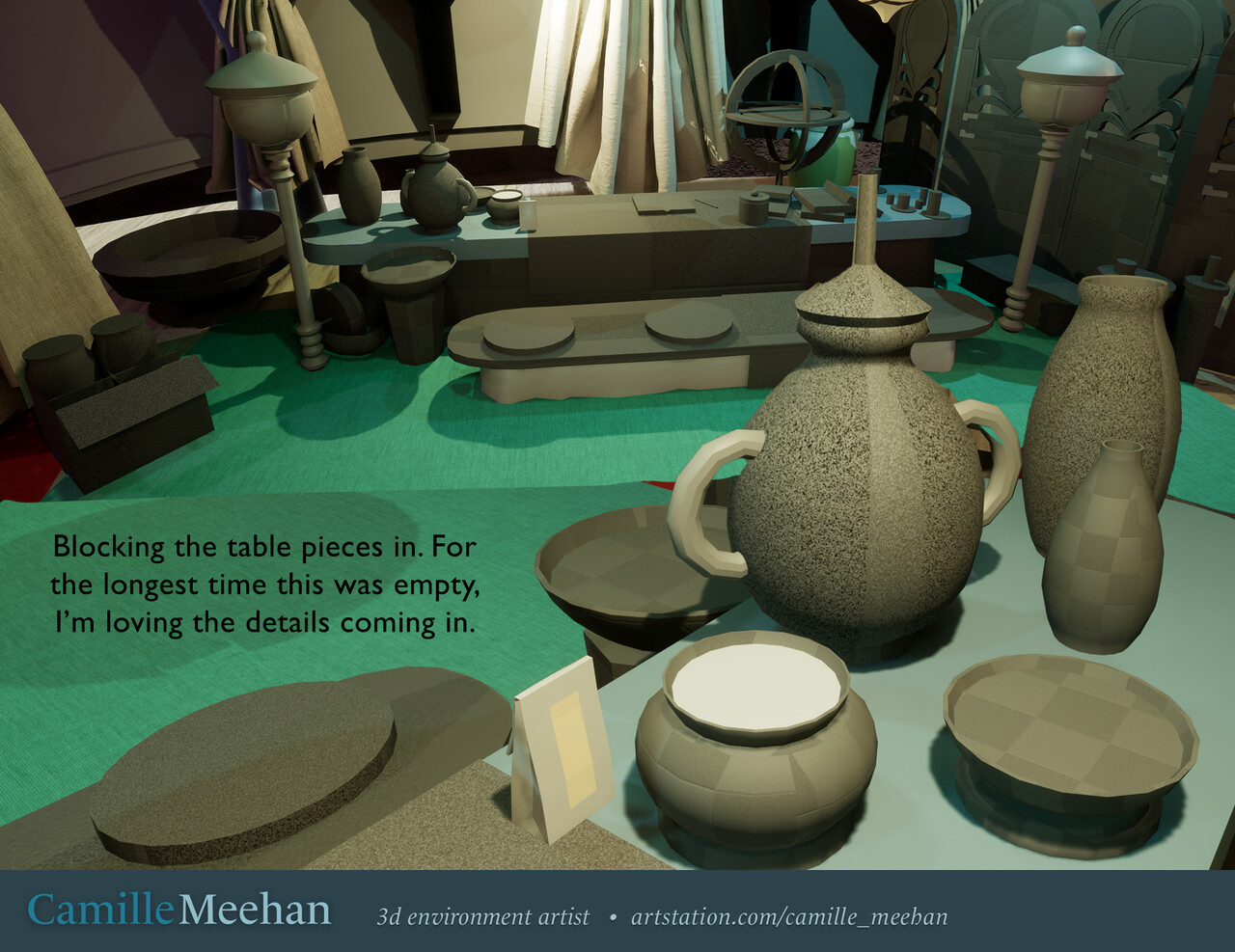 Tables in, landings out.

I'm going to focus more on the interior for a while, fill up the table. I modeled the bench and table today. You can also see today's updated landing, with a new trim, and a set of basic UVs applied. I also adjusted the fabric's tiling to reduce the bulkiness of the curtains. Capt'n! We're givin' her everything we got!

I'm happy. Things are starting to look the way I'd like. In particular, I'm struck again by how helpful it was to have JBKappirossi help me set up a nice skylight. This sunrise shot is so beautiful. 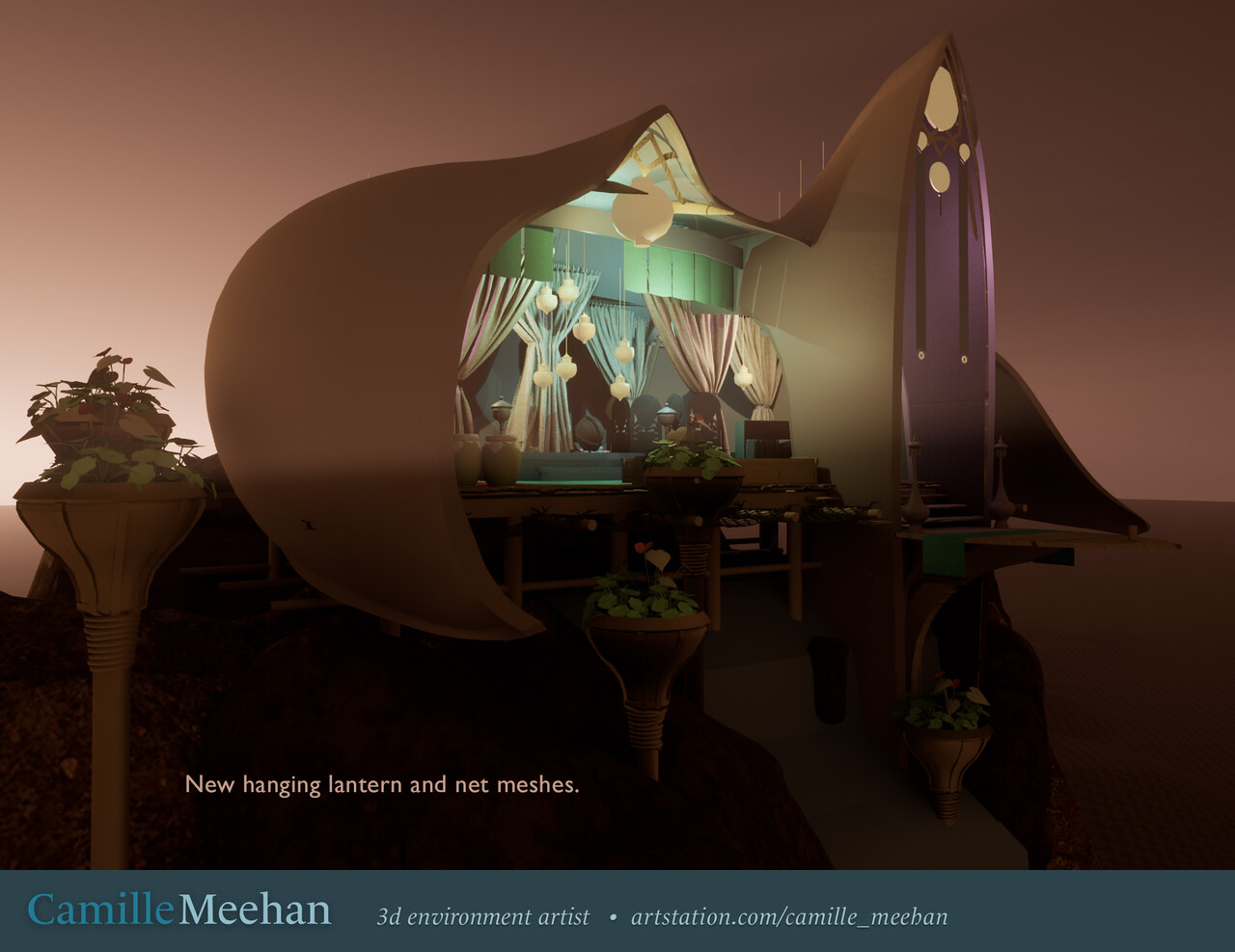 The net meshes being added here are a huge deal! After several days of failing I finally got it to work the way I want, which is even better than initially planned. The net is dynamic due to using Maya 2022's Sweep functionality. I can change the geometry provided I save the curves. I used a Python script made by Schocki on Gumroad to connect the curve vertices while still keeping the curves separate. Make sure your curves all have the same pivot prior to running the script or you will get undesirable results. Thank you to Will Chambers for pointing me to the script, all of my netty plans hinged on that functionality working.

Here is a closeup on the preliminary net in Unreal. I believe it adds a lot to the scene. 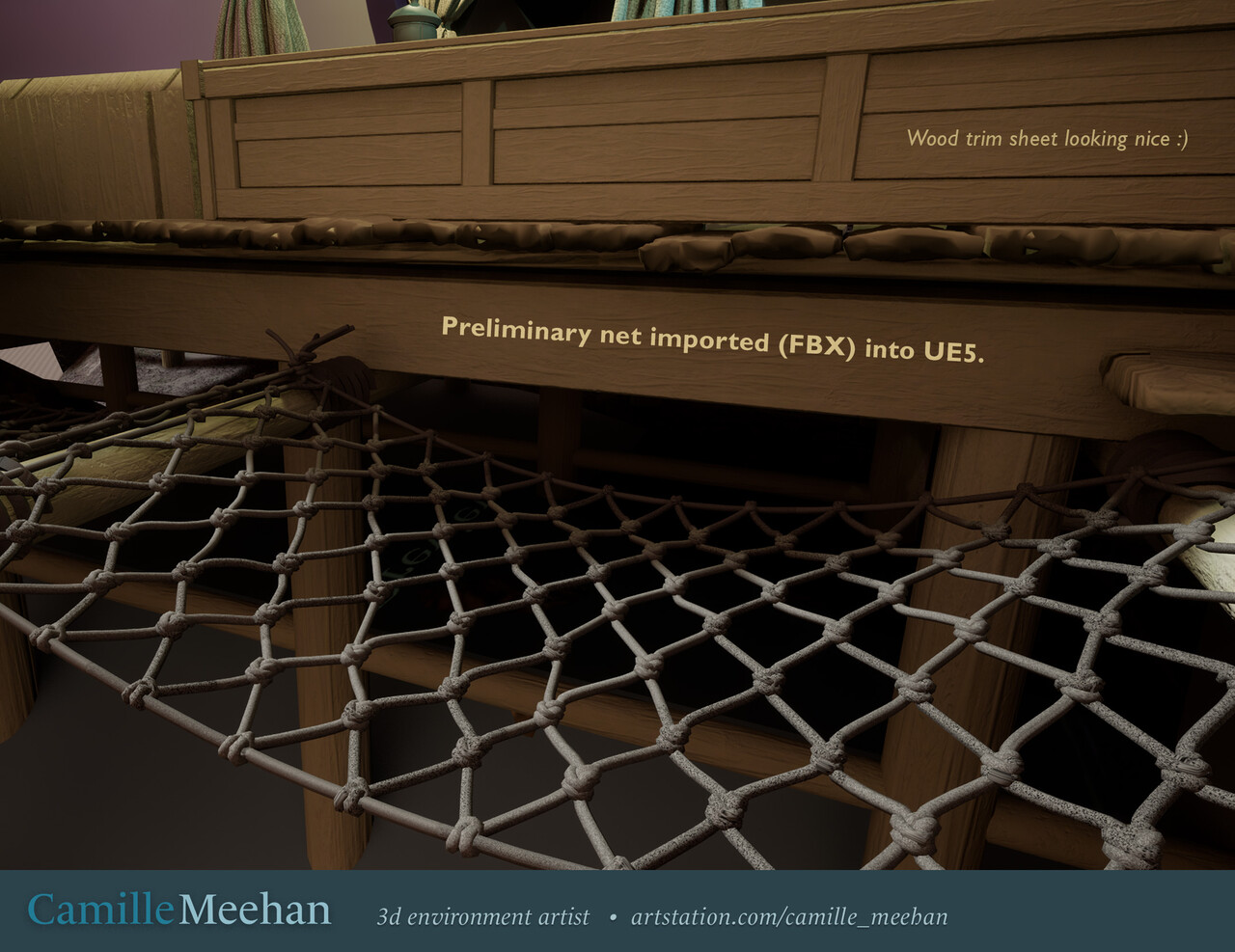 A bit further out now. 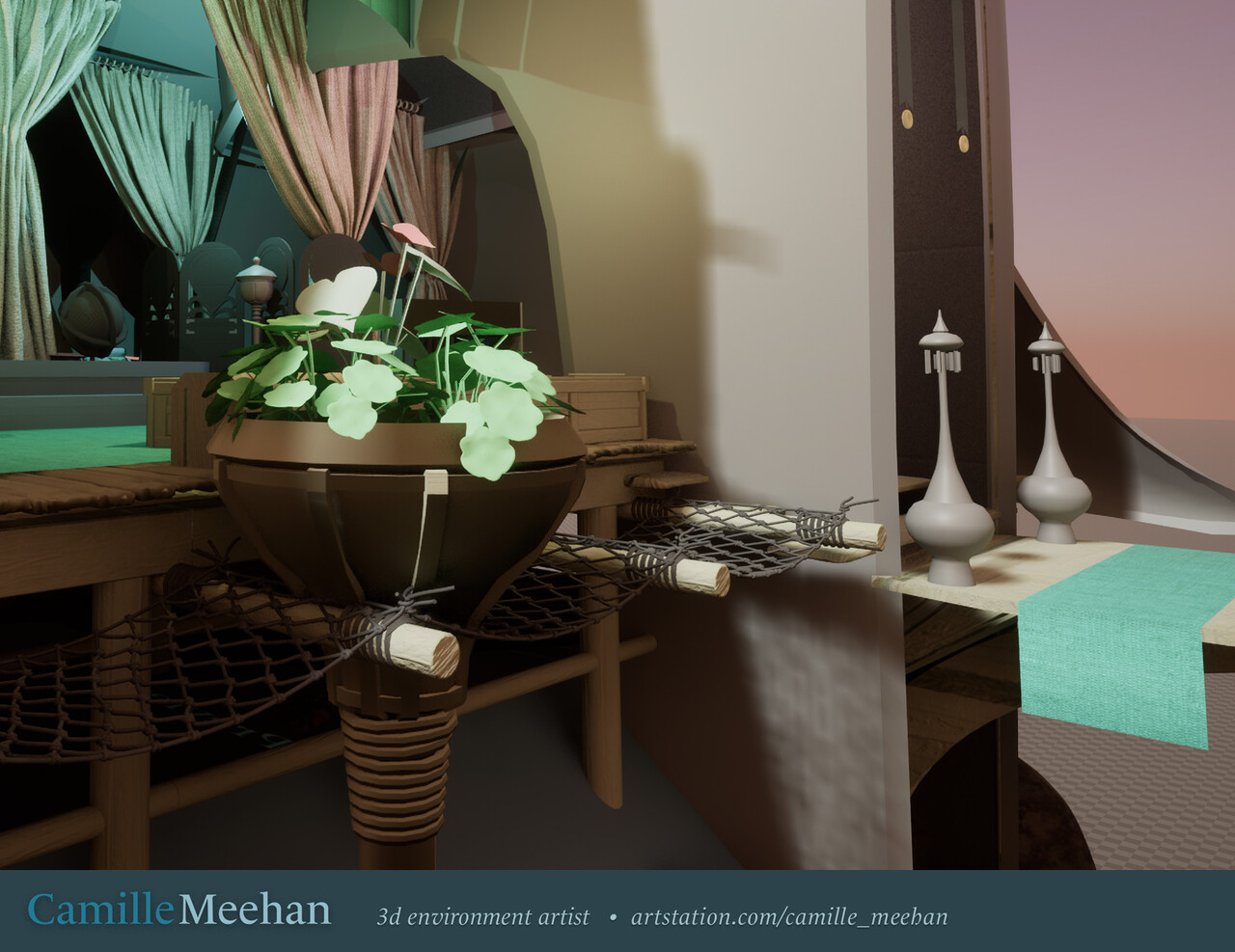 Excited! Looking forward to tomorrow, and to sleeping tonight. G'night.

Curves...so useful and yet so frustrating to use. I am currently updating from Maya 2020 to Maya 2022 for the Sweep Curve command. Wish me luck, pray the bugs are rare.

I can now use paracord to make a net.

Today I've created netting for my shop, to catch all the wayward children, or clumsy adults. Wouldn't want anyone meeting an untimely doom at the bottom of a waterfall would we now? 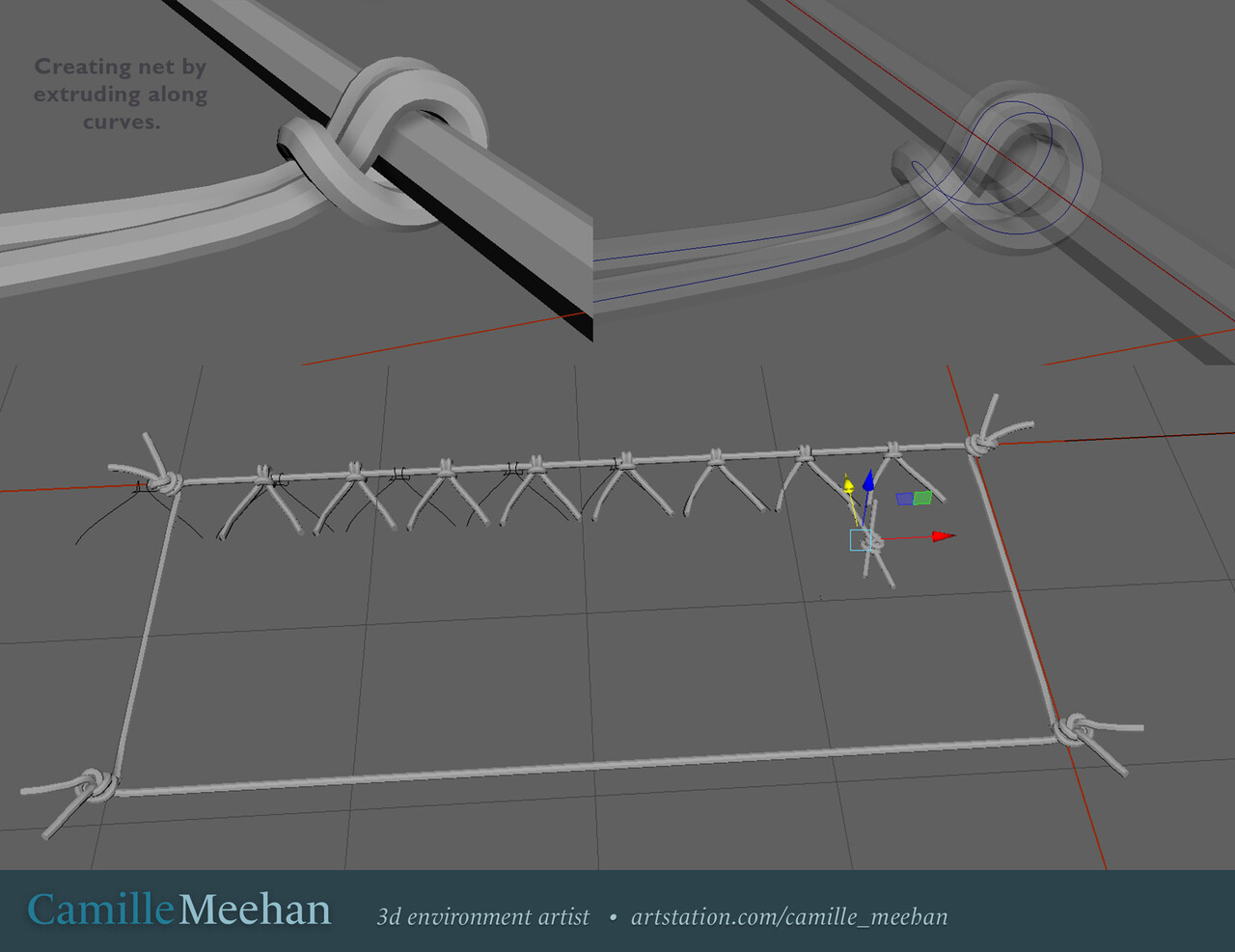 I include the video showing how to create your own knots down below. While it is relatively easy in technique, I find it a bit clunky. I think that my friend Niehc had it right when he used a nurbs circle to do this rather than the polygon faces as I've done. I'll see if that doesn't work a bit smoother tomorrow morning.

How to make a net using paracord for the survivalists and other curious folk.

Updates on the Unreal environment I've been working on. Thanks to JBKappirossi I switched my lighting and sky sphere. It's the biggest update to the scene. Smaller updates include the mesh room divider modelled out and a quick update of the main buttress supporting the landing platform. 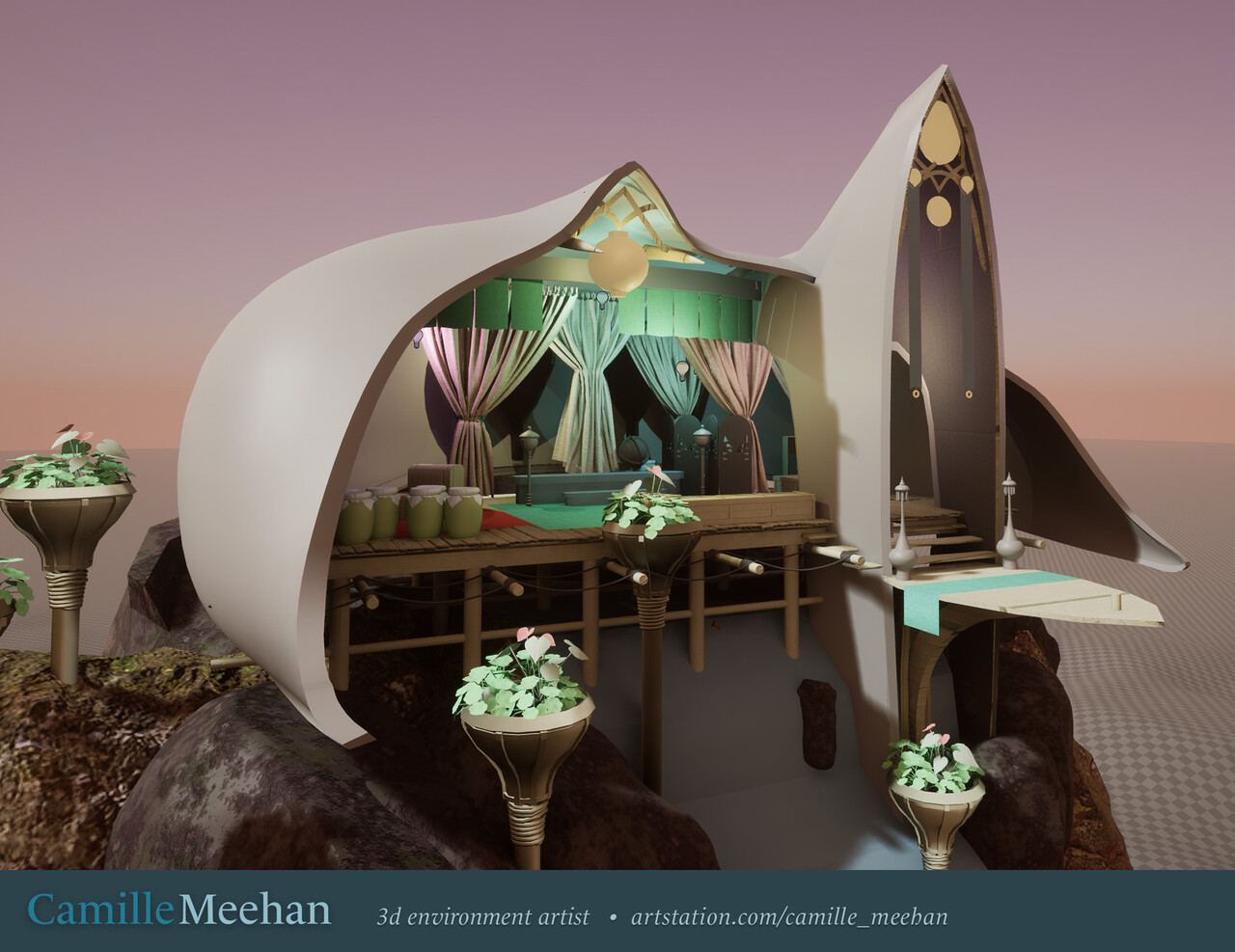 Since I last posted you can also see updates to the wine jars (barrels) on the left side. 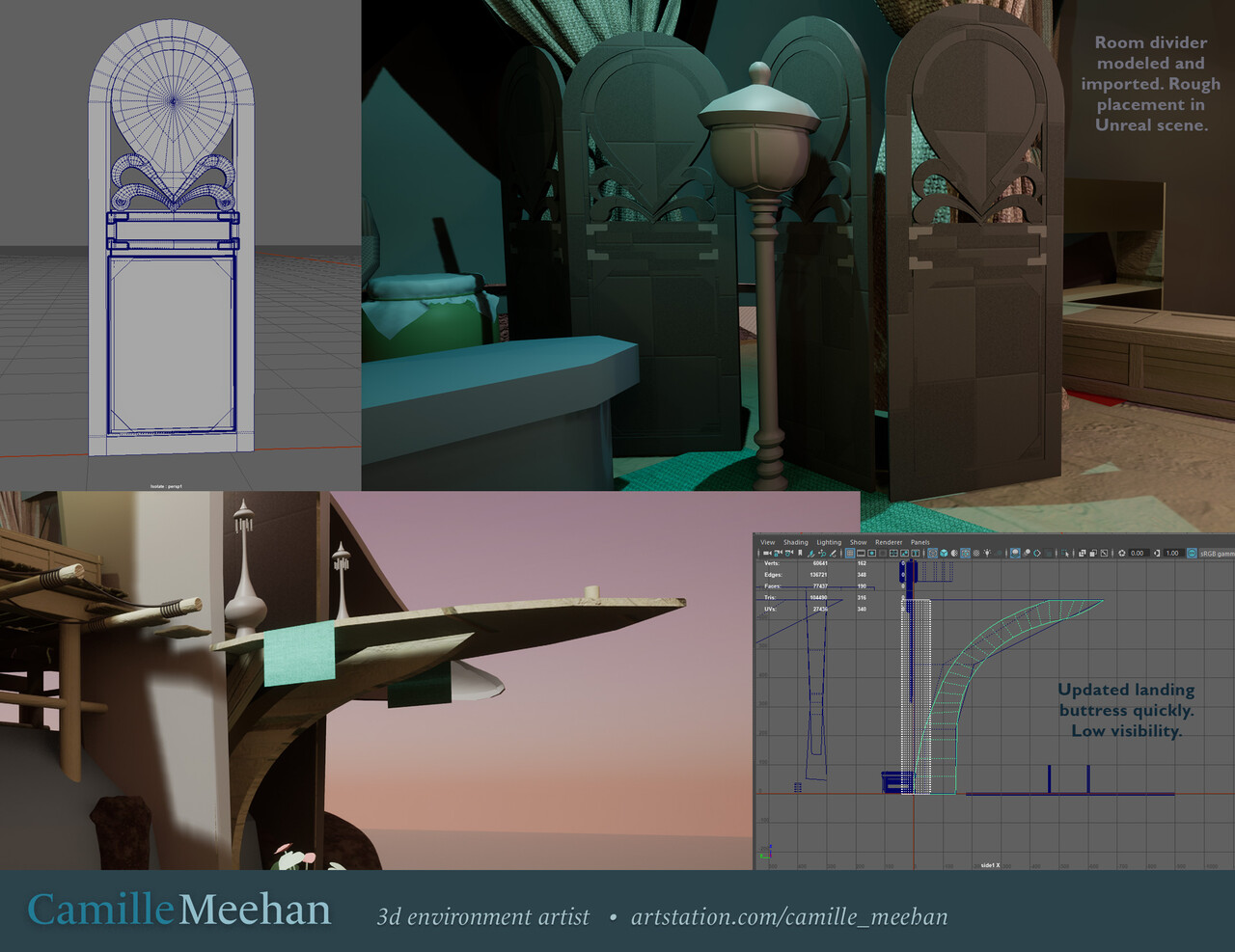 The divider has some nice details, I considered just baking to a plane but decided against it. I really want to see the lighting responding to the gaps in the divider.

I updated the landing buttress, but because it isn't very visible in most of my shots you can't really tell. I wanted to move the piece further away from block-out stage and the chonky buttress was getting old.

EDIT: Woah, a few more updates than I realized to this between now and the last one. There are also improved giant planters, and giant nasturtium leaves in the planters. Probably a few more pieces snuck in there too, I've been busy.

I adore plants, study them in my leisure time, doesn't matter where I live, I'm going to find that interpretive trail and hike it to find out the local environment. Given that, I've been intimidated by the process of creating plants for games. There are quite a few steps, modeling or sculpting the plant, baking high to low poly, texturing, bringing it all back into your modeling program to place cards, fixing the normals, and then finally importing into engine. This wasn't what I expected when starting my voyage towards mastering the art of 3d foliage.

I do love plants and I'm relieved to have gotten past the technical hurdles on this Anthurium. It needs lots of work, but the plant is in and I feel victorious. Next I'll get some giant nasturtium in there to fill out the planters.

Here is the latest. 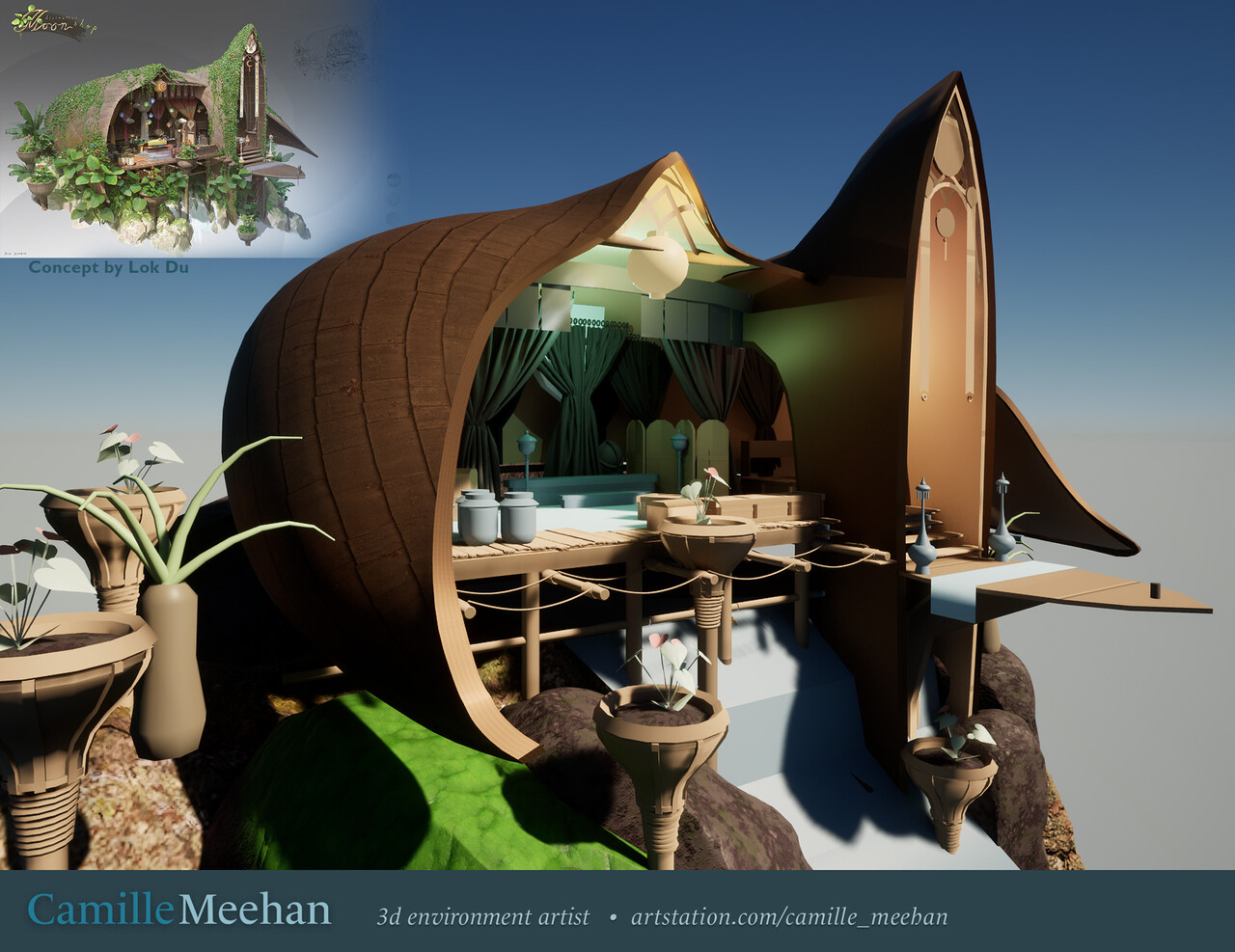